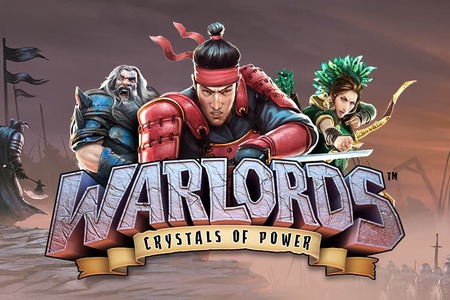 Warlords Crystals of Power slot has been created by Net Entertainment and comes with the Game of Thrones kind of conflict theme. It has five reels and 30 pay lines. The slot concentrates on the three remaining rulers; the Priestess, the Samurai and the Barbarian.

After a long time fighting, they are left to battle each other to determine the greatest ruler and retain all the wealth. The medieval theme, the unique graphics and the animations make the slot enjoyable and rewarding thanks to the huge array of features embedded in the game.

When it comes to the design, you will have very little to complain about. The Warlords Crystals of Power slot looks incredible with its sharp animations, great sound and high-end 3D graphics.

The Warlords Crystals of Power slot is set on a battlefield background. More to the stacked symbols, there are the overlay wilds, that will appear on the reels randomly.

When you land the Barbarian overly, you get to add a 2×2 square of the wilds on any position on the reels. This is from the first to the fourth reel. When you get the priestess and samurai overlays, you will get between two and five wilds.

The feature is randomly triggered in the main game. After triggering it, you will get three possible outcomes which are associated with the game characters.

You get from two to five wilds on the first to the fourth reels.

You get four wilds in the form of a square on the first to the fourth reels.

This feature will give you two and five wilds on the first to fifth reels.

This feature will be brought to life after landing three scatters on a win line. There are three free spins features where each relates to the game character. Landing blue scatters will activate the Barbarian free spins, when you get green scatters, you will get the priestess free spins while the red scatters give you the Samurai free spins.

When the scatters are from different characters, you will be entertained by one of the greatest battles. The winning scatter will remain active and you might get more spins if there are more scatters appear during the feature.

When you do not get the same scatters on a winning line, you will get to the final chance feature that has the potential of giving you 100 times your stake.

With this feature, you get at least nine spins. If a new scatter appears you will get three additional spins. The potential wins you get with this feature are up to 600 times your bet amount.

This feature gives at least five free spins. The scatter acts as a sticky wild when the spins are in place. Similar to the Barbarian feature, you get the potential of winning 600 times your bet amount.

With the feature, you get seven spins. If you get an extra Scatter you will have your multiplier increased by one every time it appears. This is the most rewarding feature and will give you up to 6,666 times your stake.