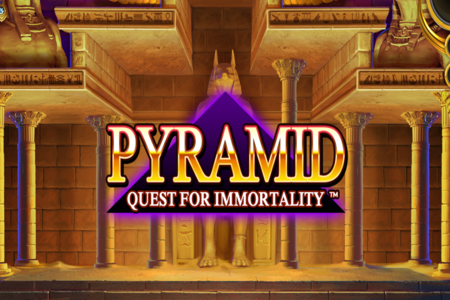 How about you pay a visit to a secret sanctuary in Ancient Egypt? Sounds like a real archaeological adventure! From the visionary team at Net Entertainment comes a brilliant Egypt-inspired video slot called Pyramid: Quest for Immortality.

If you appreciate ancient cultures, immersive slot graphics, amazing features and good payouts, this is the slot for you.

The designers really had fun with this one, and it shows – the game has impressive looks and works like a charm across all platforms. It is arguably one of the best Egyptian slots available online and certainly one of the best games in NetEnt’s estimated portfolio.

World of Pharaohs and Gods

A bit of time travel power and you’ll find yourself in Ancient Egypt times when the gods were the creators of the destiny of men and the pharaohs were the one who spoke the word of the gods on land. Those times must have been fascinating to live in almost as they are fascinating to us now, who live in the modern world governed by technology.

Feast your eyes with vibrant graphics and stylistic representations of the old gods Ra and Anubis watching the reels from both sides. The reel grid has a pyramidal structure which from top to bottom has one symbol, then three and then three rows of five symbols. The icons can be divided into two groups, those with higher values and those with lower payouts.

The high paying symbols are the pharaoh, his mistress, a scarab and two Egyptian hieroglyphics. Lower values are represented by playing card symbols from 10 to Ace carved into pyramid blocks. The Ankh, ancient cross-like ideograph symbolising life itself, is the game’s Wild. Any three symbols in adjacent reels will form a winning combination, and there can be 720 winning possibilities or ways to win.

Feature-wise, Pyramid: Quest for Immortality slot has quite a lot to offer.

First of all, it benefits from the well-known, NetEnt trademark Avalanche technology, also found in Gonzo’s Quest. Instead of spinning reels the slot shows symbols falling from above into positions, and as they form winning combinations they clear out their spots, letting new symbols to fall down and occupy them. And this can go on and on as long as the symbols generate wins. After three consecutive avalanches, the Avalanche Multiplier on the right will increase by 1, and it can reach up to a 10x multiplier.

Pyramid: Quest for Immortality slot does not have a free spin round, but it does offer some Wild action for more balance boosts. The feature is called Wild Generation and it happens whenever a symbol that forms a part of a winning combination lands on top of the middle reels. This symbol will turn into a Wild and turn the rest of the connected symbols into Wilds for the next spin, or in this case, avalanche.

The RTP of Pyramid: Quest for Immortality slot is 96.48% and it is described as a highly volatile slot game. Perfect for you who wants a share of the riches of Ancient Egypt!