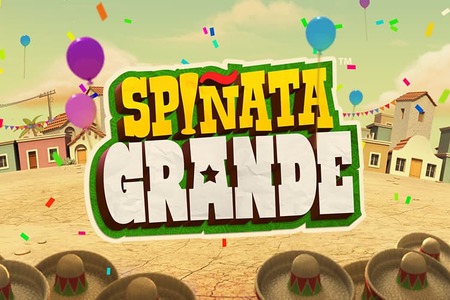 Released in March 2015 there are plenty of fresh ideas in this game to keep you interested, and it’s a fun fiesta that overflows with vibrant colours in a Mexican themed party. Play for a while and you might be lulled into thinking that there isn’t much “punch” to the game until you score a big win and the trumpets come out.

This game has a high return to player percentage of 96.84% which is only slightly lower than the recent games we’ve covered in the musical trilogy from Net Entertainment like the fantastic Guns And Roses Slots game

A “Pinata” is a container object that is filled with sweet treats and candy and is made to be smashed open to reveal the contents. The container to be smashed is usually made of paper mache or ceramic and is designed to be easy to break so that even the youngest kids can take part in breaking them open.

The tradition is unmistakably Mexican and has travelled to Europe via Spain, and that’s where this game gets its idea. It’s your job to beat the Pinatas into smithereens and reveal the prizes as you go along.

This slot has five reels, four rows and 40 pay lines and it’s playable from 20p to £200 a spin, so there’s something for everyone in this game. The background is a dusty old town through which various old vehicles and people pass to keep the feeling of time and motion active while you play the game. Watch the balloons rise in the distant background!

There are four “Spinatas”, the objects that you need to break to win the bigger prizes. They are a fish, a donkey, a bird and a bull. The high card faces plus the 10 make up the rest of the values. All normal symbols can appear as the colossal symbol which is a 2×2 or 3×3 block of one symbol type that fills the main area on the winning line.

The game reels are beautifully smooth and the soundtrack, while it may not have you toe-tapping, certainly adds to the party atmosphere.

There are seventy different ways to stake your way in this game and four main features including mini slot reels, free spins, Colossal Wilds and a Colossal bonus

The bomber feature is a random bonus, and you’ll see it awarded when the lights dim and the air raid warning siren begins to wail.

The Colossal wilds feature is an interesting variation on the “block wild” theme. This is a 3×3 or 2×2 block of symbols grouped together to make a “Colossal Wild.”

The Colossal Bonus symbol is the key part of the game and landing all of it on the reels will trigger the Mini-Slot Bonus round. Each bonus symbol spins individually to give you free spin or extra coins.

If you ever wondered what people saw in playing slots games, then this will give you the answer. It’s an original concept, and the Colossal Wilds will keep you hooked into the game long after the trumpets have played their blend of happy mariachi music.