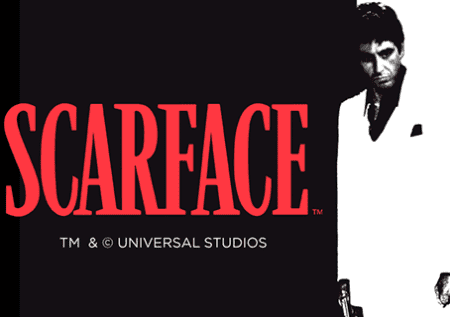 Another joint venture with Universal Studios, the Scarface slot game is based on the classic movie of the same name. And what a movie it is! Al Pacino gave one of his greatest ever performances in this movie, and the only thing that spoilt it for me was the excessively violent ending which some people seem to love, and others hate in equal measure.

Cuban Refugee Tony Montana arrives in 1980’s Miami with nothing and rises through the ranks to become a powerful drugs lord. This slots game has none of the profanity, sex and violence that the film portrayed. It’s one of the best mob films ever made, and mob films really are my thing.

Scarface slots are realistic, excitingly vivid and packed with great gameplay. If you like the mob theme, you’ll love this slots game.

You wanna fuck with me? Okay. You wanna play rough? Okay. Say hello to my little friend!

First of all watch the game introduction – it’s one of the best intros to a slots game yet produced. This game comes complete with cut scenes from the movie including the “say hello to my little friend” which is now movie legend.

The Scarface slot has three stacked wilds on three reels. You need to get the stacked reels on top of each other to trigger a different feature each time. Each different character triggers a scene from the movie.

The one thing I will say about this slots game that is negative is that it is lower variance. But then most branded games are built that way.

The stacked wild feature can be created by Manny, Elvira or Tony Montana. By the way, it’s interesting how many Tony’s there are in mobster movies don’t you think? Fat Tony, Tony Soprano, Tony Montana…

Landing a stacked wild on reel three will activate the “say hello to my little friend” feature. Gangsters storm Tony Montana’s house and once they get to the balcony the door bursts open. You’ll need to use grenades or guns to kill the attackers.

Landing a stacked wild on reel four will activate the free spins round.

Play this Scarface slot game even if it’s just to see the movie clips because they are wonderful. It may be low variance, but it’s still one of the best slot games ever made.