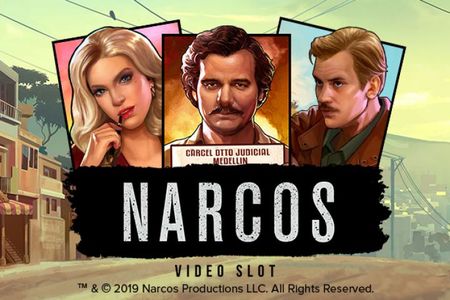 What you’ve always wanted is to recreate the miserable corruption, slaughter, and gangsterism of Colombian drug traffickers in a slot, right?

Apparently so! And so we have this Narcos slot from NetEnt, a game based on the TV show of the same name that tells the story of Pablo Escobar, the most notorious of Colombia’s cocaine barons.

The Netflix series has proved a big hit and has now expanded its TV universe to take in some of the stories of Mexico’s similarly murderous smugglers.

And before you can say, “no-one will win a war against drugs” NetEnt, one of the giants of the slots world have taken the TV drama to the online casino world.

They’ve done so with a great deal of style too, though it’s Grand Theft Auto, the video game, that is the most obvious visual touchstone for this crime-themed, character-based 5-reel game with NetEnt’s 243-ways-to-win system.

As you’d expect, there’s plenty of bonus action and a lot of sophistication in gameplay and visuals as well as some video-game-style action.

Should you risk your life with this trip into the dark world of dealing?

Let’s have a look in this Narcos slot review!

The Developers of Narcos Slot

If you play slots you’ve almost certainly played a NetEnt game, or two, or 10 or more. The company is enormous, and makes not just games but also platform software – whole sites are run by NetEnt.

The result of this is enormous power: NetEnt are reported to have around one-fifth of the global market in slots, and more than a quarter of the European market. When their games are released they go straight to the top of the charts – it’s hard to avoid them when they’re in every lobby of every site.

They produce good quality titles, though, and you can’t put all of their success down to their size. Their two biggest hits – Starburst and Gonzo’s Quest – have been around forever, at least in terms of the novelty obsessed slots industry.

The company is fully licensed and as legitimate as you could wish for, with a history dating back to 1996, in super respectable and legal Sweden.

Their games cover every conceivable genre and style, with more than 300 listed in the UK market alone. You could probably spend the rest of your life playing NetEnt games and never tire of it.

The Facts and Figures about Narcos Slot

There are 243 ways to win in this game rather than pay-lines, with non-linear connections counting for prizes.

They deliver medium-to-high volatility – i.e., slightly more likely than average to deliver bigger prizes but to do so less often – game with a theoretical return to player of 96.23%, or a house edge of 3.77%. That means that over the game’s lifespan it is expected to keep hold of that proportion of the money that is spent on it. This doesn’t mean your session with the game will go exactly like that though – it could be much worse, or much better – and it doesn’t mean that your game will not be random, it will be.

The potential top prize of 602,400 coins is very tempting, and you’ll need to stake at the top of the betting range – from 20p to £400 – to win that. Make sure you know top prizes and pay-out limits on the site you’re using. And make sure you always gamble safely.

The Narcos slot machine was released in May 2019 and you can play it on any device, so long as that device has JavaScript and HTML5.

Most NetEnt games operate on the same basis, and Narcos slot follows the pattern, but with style.

The spin button is now the revolving chamber of a handgun. To either side of it sit an auto-play function and a max bet function. Autoplay these days are very sophisticated and include all sorts of stop functions for safe play, so do feel free to use them.

The rest of the controls, like settings, sound, and further help should be in your game frame.

How to Play Narcos Slot

The paytable opens with the old favourite card suit symbols, which pay double or three-times stake for sets of five.

The top symbols are agent Javier Pena, paying 15-times stake for a set of five. Agent Murphy pays the same, as does the wild symbol.

There are two in-game bonuses and a free spins round.

The drive-by game triggers at random during the base game. A car full of bad guys shoot past and unload their guns across the reels, turning high-value symbols into wilds.

The scatter is a car, and, as usual, it’s the trigger for the free spins game. Free spins are granted in a set of 10. On each spin at least one of the high-value symbols will turn into a wild. Free spins rounds can also feature walking wilds, which can extend the numbers of free spins if they’re still on the reels at the end of your free spins round.

NetEnt games are reliably good, and if you like them you’ll love this one. It’s superbly stylish and the graphics, animation, sound and FX are really top quality.

The figures might not be quite up there with the sort of money the real-life Escobar had to hand, but with a £400 stake offering a possible top win of 1,506-times stake, or more than £600,000, you could start an empire of your own, if you want the risk of dying in one of your country’s largest-ever paramilitary and police operations as our inspiration here did!