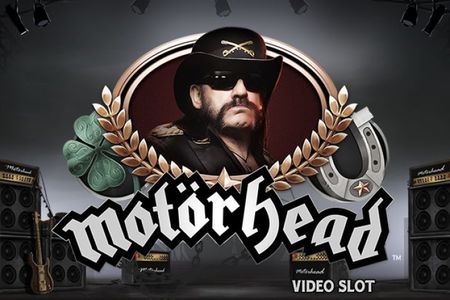 Lemmy and Motorhead are featured on the third and last of Net Entertainments trilogy of slots games featuring famous rock icons.

Formed in 1975 Motorhead have released 23, yes 23 studio albums over a career that spans 40 years. The height of their powers was reached in the early 1980s when they generated hits “Ace of Spades” and “Bomber”. The band’s style can best be described as ear-splittingly loud, and you wouldn’t want to be close to the front of the stage in a live performance.

On the face of it, Motorhead slot would seem a strange choice for a slots game but what makes this work is the loud musical backing track, and I guess that’s the reason this band was chosen. They are not one of my favourites that’s for sure but can the gameplay make up for it?

This game has a high return to player percentage of 96.98% which is the same as Guns And Roses Slots game

The intro to the game sets the tone with a “Good Evening; We are Motorhead! And we play rock and roll” which is questionable in my book, but the video intro works well and sets you up for what is going to be a loud and furious slots game.

Of course “The Ace Of Spades” is a brilliant track to choose as the set opener. “If you like to gamble, I tell you I’m your man” shouts Lemmy as Mikkey Dee does his best impersonation of The Muppets “Animal” on drums. Whatever your musical taste you can’t deny that there is some highly charged energy being dished out here.

Similar to Guns And Roses slot the graphics here are very straightforward with the high symbols being Lemmy and the trademark Motorhead logo. Visually you wouldn’t say it was progressive with horseshoes, cherries and stars amongst the symbol icons but it’s certainly not the worst you’ll ever see.

The game reels are set on the bands set the stage with plenty of flashing lights and strobe effects that light up when you score a win, and they are backed up with some excellent animations which add greatly to the gameplay and make this slot more entertaining. Turn on “Rock Mode” to amp up the music if that’s your thing.

Features are thin on the ground compared to Guns and Roses slots, but the X-rated sound snippets might amuse you. For a while anyway.

The bomber feature is a random bonus, and you’ll see it awarded when the lights dim and the air raid warning siren begins to wail.

Every spin has the potential to produce a stacked reel of mystery symbols.

Three scatter symbols anywhere on reels 3,4 or 5 will trigger the free spins feature.

It could have been much. Much better and it feels like this slots game is a stocking filler rather than the main event. If you’re a fan of the loud musical style purveyed by Motorhead, then you’ll like but not love this slot and Guns And Roses Slots game was the best of the trilogy.