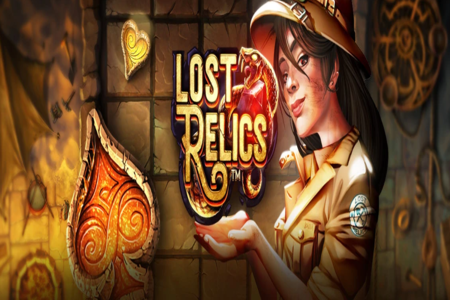 Slot designers have decided there are two sorts of archaeologists in the world: glamorous young ladies in the Lara Croft, or handsome older guys in the Indiana Jones mode – both of whom are more interested in battling foes and defeating traps than actually, you know, cataloguing their finds or studying their subject. NetEnt obviously couldn’t decide which category to put their historic delver in Lost Relics slot into and have mashed up the two to come up with a pretty young woman in an Indiana Jones costume!

Styling aside, NetEnt is one of the biggest names in the slot business, and that’s because they produce good quality games that look and sound great and deliver a great experience to players.

This journey into the past should be no different. It has five reels, uses the Cluster Pays system to deliver wins and has three base game features and a big free spins game with its own extra feature, a Hidden Chest round with bigger and better prizes. Staking is from 0.20 coins to 400 coins, with a top jackpot of 1,000x stake delivered at 96.3% theoretical return to the player.

Journey to the past

So let’s dig in. If looks were everything, then Lost Relics slot would get 100% straight out of the door, the backdrop is atmospheric and convincing, dumping players into a spooky ancient temple with weird machines and a burning fire.

The symbols are well realised too. Above a set of card suits on the paytable are some archaeological artefacts: a helmet, a bracelet, daggers, and a snake (remember Indi’s phobia) draped over some precious stones.

Rather than pay lines, there are clusters here, so you need groups. The snake-draped rubies are the most valuable symbol with 300 times stake delivered for a grid-full of 25 symbols.

Even the base game, the Lost Relics slot is feature-packed. Wins can trigger one of three extra games, each with their own symbol.

A Coin Win – marked by a lion-head coin – feature chucks a big cash prize onto the reels at random. The Extra Wilds (a W and a snake) feature throws three extra wilds onto to reels. Extra Scatter (an Assyrian man with a scatter symbol) turns a winning symbol into a scatter.

The scatter triggers the free spins round when it appears simultaneously on reels 1, 3, and 5. This puts you in an exciting extra round of 10 free spins. Added to the mix is a Hidden Chest feature. This is a behind-the-reels symbol that can be revealed when winning clusters are uncovered. They come in three sizes and contain either more free spins, some sticky wilds for the reels, or cash prizes of up to 30x stake.

Lost Relics slot game is a classy act and well worth exploring. The graphics, sound, and animation will blow you away. But if that wasn’t enough, NetEnt has also packed it with original and engaging game elements that make even a short spell at the reels a rewarding experience. Get excavating now!