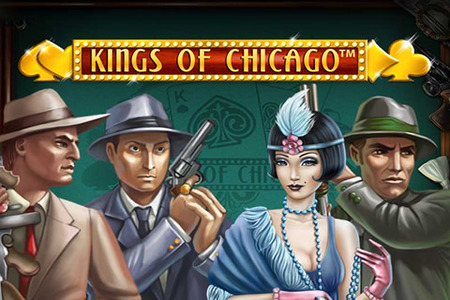 This is my kind of slots game. Combining the fluidity of fruit machine style play with video poker is a masterstroke, and as usual, the creative brains at Net Entertainment have been working overtime.

Being as my favourite casino table game is Casino Hold ’em, you’d expect me to like the Kings of Chicago slot game and not only do I like it, it’s also one of the most consistently highly rated slots games you can play.

With each round or spin yours are dealt 3 rows of five cards, and the pay line is the straight row from left to right and the diagonal V. You have to get three of a kind or better to win, top pair or two pairs won’t do I’m afraid so you poker junkies better take a look at the paytable:

The Joker acts as a wild symbol. Sit down with your mobster chums and enjoy Kings of Chicago for it’s one of the best slots games ever made.

Alphonse Gabriel “Al” Capone (/æl kəˈpoʊn/;[2] January 17, 1899 – January 25, 1947) was an American gangster who attained fame during the Prohibition era as the co-founder and boss of the Chicago Outfit. His seven-year reign as crime boss ended when he was 33 years old.

There’s no skill involved in this game, so poker fans look away now. However, there’s a great deal of entertainment to be had out of this game.

The cards depict various gangster bosses on the face cards, and the background audio track makes you feel like you’re sitting on a barstool somewhere in downtown Vegas whiling away the time at a poker video slot. The ambience is wonderful, and it makes the game.

This game uses one deck of cards so there are no duplicates and it’s played on 5×3 cards instead of the traditional slot reels.

The Joker can replace all other cards, and if you make a winning hand with a Joker, you’ll be paid out double.

Kings Of Chicago Slot – The Verdict

This is one of the only slots games that I’d give up playing Starburst slots game for. Sitting on a barstool playing video game poker is my idea of heaven.

The backing audio is great, and the gameplay is wonderful. The Kings of Chicago slot is one of my favourite NetEnt casino games.