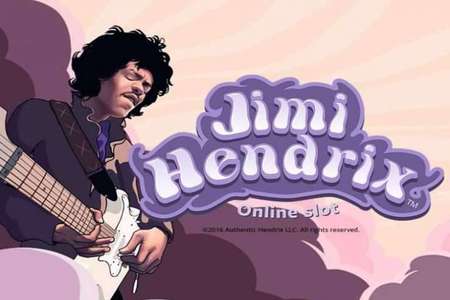 Released on the 21st April 2016 by NetEnt, the slots game maker goes from strength to strength as it expands on its music theme first created with the “Guns and Roses” slot game. For the youngsters out there Jimi Hendrix was the greatest guitar player who ever lived and his musical compositions and interpretations of classic standards like “Star Spangled Banner” generated both animosities from the establishment and a fervent following from those who recognised genius at work.

Hendrix had his career cut short when he went the way of so many other talented musicians and died of a drugs overdose aged just 27.

NetEnt has been to the negotiating table and comes back with rights to broadcast after doing a deal with Experience Hendrix LLC who manage the music rights, and there are five brilliant soundtracks to accompany this game.

This Jimi Hendrix slot has a high return to player (RTP) of 96.9% so you are guaranteed good value for your money and whilst many of the features are based on the same format as its stablemate, this new game elaborates on the key concepts and once again provides a slots game that ignites the senses.

You will feel the Jimi Hendrix experience in this game, and even though Hendrix live passed away in his prime, you can experience the “Purple Haze” in its online form along with “Little Wing”, “Foxy Lady” and several other Hendrix classics.

The graphics leave you in no doubt that you have been transported to the land of flower power from the late sixties and whilst the gameplay can seem simple at first the flowers that appear when you hit a winning pay line will grow on you (hehe!) and the longer you play, the more features you uncover.

If you are underwhelmed when you first start playing this slot game, then you have been intentionally deceived. For underneath the simple melody lies some blistering solo’s in the shape of feature rounds that will have you coming back for an encore.

It’s a totally groovy design and funky style that along with the rocking tunes will keep you entertained for a long time.

There are no shortage of bonus features and free spins in this rocking game with wild substitutions and scatter symbols that will have your joint bouncing in no time at all. Three great features and a mini-game will ensure your entertainment on a long hot summer night.

The “Pick and Click” feature is where you want to be in this game but let’s take you through the features one by one so that you know what to expect.

Why would it be called a “Red Guitar Spin” well you guessed it! Jimi was famed for playing with his red guitar. Get 4 or more red guitar symbols anywhere on the reels and this bonus is triggered.

During each re-spin, the red guitars stay on the reels as an overlay. Every time you add a new red guitar to the collection another re-spin is triggered. The round only ends when no more red guitars are added to your collection. In theory, this round might never end, and you’ll be caught in a virtual reprise. A kind of Hendrix time vortex.

Land a Purple Haze symbol on reel one and you are taken off on a free spin where 10, J, Q, K and A are morphed into wild symbols for the spin. The Purple Haze is also turned into a wild spin for this feature. Purple Haze is the iconic song that launched Hendrix into public consciousness and the track that launched his career.

This is the “Tour De Force” of the game and the reason for playing it. This mini-game is packed full of features in its own right and gives you four different ways of winning. To activate this round, you need three scatter features on reels 3,4 and 5, and when you do it, you’ll be rewarded with a screen full of giant speakers from which to make your selection.

Pick a speaker and match three types of the symbol to win that prize.

Collect three coin symbols and get a multiplier of x8 or x30 to boost your win.

This feature gives you six free spins and wild reels appear on different reels for each spin. Three orange haze symbols activate this round.

On the first free spin, a wild reel appears on the fifth reel. On the second it’s on the fourth and the fifth. The third, reels 3 and four become wild and for five its reels one and two. This last one is repeated for the sixth spin.

Get three purple haze symbols, and this will earn you between 6 and 12 free spins. As you play your way through the spins more purple hazes are added to the reels to increase your winning potential. As with the Purple Haze feature 10, J, Q, K and A are transformed into wild symbols for the duration of the bonus round.

Another chance to win big with between 6 and 12 free spins awarded with an overlay card that keeps being added to. Just match three symbols to unlock this feature bonus round.

Fans of Hendrix will love this Jimi Hendrix slot game and perhaps for those young enough who have yet to discover his music this slot will be one of the most rewarding you will ever play in more ways than one.

Hendrix blazed a trail and took the guitar to new places and heights which are exactly what NetEnt is doing with its slots games. Jimi Hendrix slot is a massive hit.