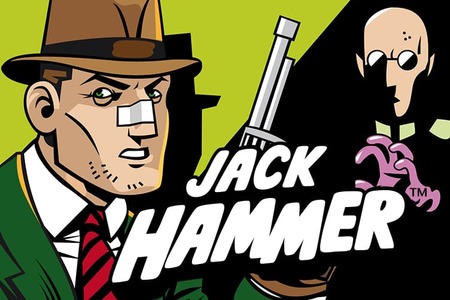 Comic book slots are some of the most visually accomplished virtual games online, and if you’re looking for the best among the best you should try out Jack Hammer slot machine by NetEnt.

The Swedish supplier made an extraordinary video slot inspired by old-school comic strips of the 40s and 50s when the superheroes were cold-blooded detectives fighting against nasty criminals.

Our hero is Jack Hammer, a macho righteous private eye, and his opponent is the mad Dr Wuten. As the evil doctor threatens Grand City, Jack Hammer is already in pursuit of the bad guys and off to find the damsel in distress. Hop into the limousine and join this thrilling comic book adventure!

You Don’t Need a Costume to Fight for Justice

A treat for fans of noir detective stories, Jack Hammer has all the right characteristics of a leading man and forms a part of an engaging comic-based storyline.

The entire game looks like a comic strip page, with sections, drawn characters and small details that assemble into a dynamic story about good and evil. The soundtrack includes dramatic compositions and police sirens typical of a car chase, and we can’t help but be reminded of the old school Hollywood movies.

The symbols include Jack Hammer with a gun, Dr Wuten, a frightened lady making a phone call while the mad doctor is lurking behind her, a new delivery boy, a blimp, a car in pursuit, the Daily Grand newspaper headlining the wrongdoing of the evil doctor, a ringing telephone and a dangerous chemical the doctor is threatening everyone with. The story can send shivers down your spine, but special symbols like the Wild and the Free Spin symbol can immensely improve your balance.

The Jack Hammer slot is played on 5 reels, 3 rows and 25 fixed pay lines. The players are allowed to choose among various bet levels.

As you get into the role of Jack Hammer and start restoring justice in Grand City, you’ll be adequately rewarded for your efforts. With a bit of luck, you’ll experience great special features, namely the Sticky Win Feature and the Free Spins.

The Sticky Win feature is triggered by any three-symbol winning combination. The winning symbols will remain stuck in their positions while the remaining reels will spin again, and if another win happens the feature will continue as long as more wins keep happening. Otherwise, the game will restore regular gameplay.

Fire or more Free Spin bomb symbols are required to activate free spins. You can get 10, 15, 20, 25 or 30 free spins! And that’s not all – all wins generated during free spins are tripled. The Sticky Win feature is still active during free spins, so the winning potential is seriously grand.

The RTP for the Jack Hammer slot is 97%, which only confirms that the popularity of the game is completely justified.

You can play Jack Hammer on mobile too, and you shouldn’t waste any more time – start playing this NetEnt gem today!