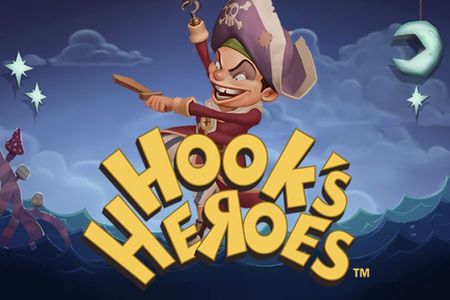 Here is another wonderful slots game brought to you courtesy of Net Entertainment. This Hook’s Heroes slot is a pirate-themed slots game with five reels, three rows and 20 pay-lines starting from just 1p per spin up to a whopping £200 so there is something for everyone here.

The accompanying blurb for this game states that it is 96.8% RTP (Return to the player) so climb aboard and get prepared to walk the plank!

This game has a fun Caribbean soundtrack that has a reggae beat going on in the background and will drive you nuts if you listen to it for long enough. After about ten minutes you’ll be ready to hit the Mute button. I guarantee it.

Hook’s Heroes slot game has two slightly different variations: The desktop game for play at home fun and there is also a mobile responsive version which has all of the smartphone Touch features enabled so that you can play on the move.

you’ve ever seen “Who Framed Roger Rabbit” then you can guess the style of visual that this game conjures up. Its quirky cartoon-style graphics are visually entertaining, and the background constantly bobs up and down giving the “high seas” feel.

The face cards from a playing card deck are used as the primary symbols with 10 through to Ace make up the main graphics. Pirate children make up the scatter symbols (with one scarily reminding me of a character from “Black Sails”), and the main pirate character is the slots wild symbol.

Feature spins mode gives you a different backdrop depending on the feature which adds to the fun, and they are randomly triggered. Fairy feature, Mermaid feature and Pirate feature give you multipliers up to 4x.

Hook’s Heroes slot is a bit of an unusual game but it’s straightforward to play, and the feature symbols are instantly recognisable. The Fairy feature gives you seven free spins, Mermaid 10 and the Pirate 15. It is when you add the 4x multiplier to the Pirate feature that you get the big wins. The Wild Pirate symbol also substitutes for all others giving you the big combination wins.

The stake levels start from 0.01 through to 1.00 and being able to play ten coins per pay-line means that you can play anywhere from 0.01 to a whopping 200 coins per spin for the high rollers.

The cartoon design continues to maintain the high standard of game output from Net Entertainment, and there is plenty to like about this game.