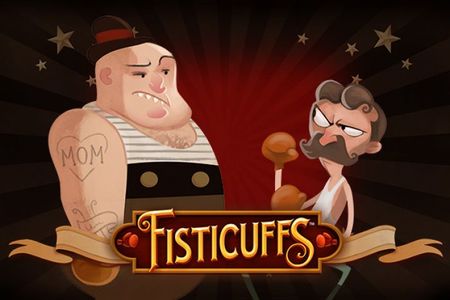 Old style Pugilism is the idea for which the Fisticuffs slot game has been based on with some vintage graphics and imagery from the sport of boxing. Gloves, belts, boots and stools are the order of the day.

The piano-based soundtrack hints at the 1920s, and you’ll be facing off with one skinny and one fat boxer in the ring. Who will win – you decide!

Fisticuffs slot is a “win both ways” slot which means that it pays out to the left and left to right with five reels and ten pay lines.

In direct contrast to the Eggomatic slot game that I covered recently there are no free spins in this slots game. The main event occurs when the diagonal wild and straight wild symbols appear adjacent to each other, and the boxing fight begins.

Jack Dempsey gave Jess Willard a lesson in boxing in 1919. If you have the stomach for it view the video of the one-sided annihilation here

This is a slapstick style video slot meant as a bit of light-hearted fun. In one corner we have the big fat boxer squaring off against the skinny guy who always goes for the body punches.

When you make a winning combination, you’ll be in for a round of applause from the audience which makes every win very satisfying! There is no jackpot wins to be scored, but there are plenty of small purses that can add up while you play this game and hit five wilds in a row will give you a big payout.

If I was being picky, and I am, the graphics quality isn’t quite up to the standard of some of the best Net Ent games and because of the consistently low payouts the boredom threshold is quite low.

There is no standard bonus game here. Instead, once you’ve activated the boxing feature, there are two mini bonus features.

The diagonal wild appears on reels 2 and 4 and also substitutes for all symbols. If the diagonal wilds appear adjacent to the straight wilds, then they will transform the symbol above into an additional wild.

The stacked wild appears on reels 1 and five but only in the Respin round and substitutes for all symbols.

It’s fun enough for the first 50 or so spins, but after that, the entertainment value begins to subside. With no bonus game and no respins there is little to keep the attention.

It’s low variance as well which means you’ll consistently be winning small amounts but hoping in hope for a bigger win.

This is a simple slot that is easy to play but punches above its weight for a short time only.