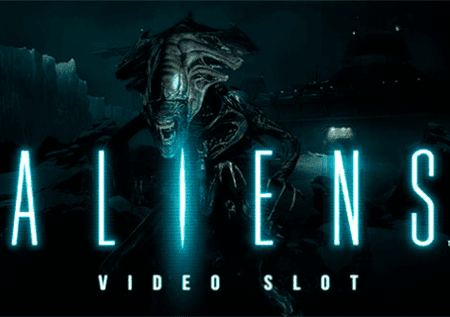 Released in 2014, Aliens slot was made in cooperation with 20th Century Fox and for those who were expecting a sub-par quality release in keeping with the rest of the Alien franchise, things were, well, surprisingly good.

The original Alien movie was made in 1979 and stands the test of time as one of the greatest science fiction movies ever made. The remake “Aliens” in 1986 is equally as good, but it is the spin-offs and dire sequels like “Alien 3” and “Alien Resurrection” that will have had movie and slots fan hiding behind the sofa. Could NetEnt do the inconceivable and make a great slots game out of the original conception?

The answer was a stunning “Yes”. Net Entertainments “Aliens” is a surprisingly playable game considering the dark material they had to work with and coming up with a concept can not have been easy. But this game is one of the best slots games around and like the original movie it stands the test of time and belongs in the hall of fame with other masterpieces like “Starburst”.

Aliens slot is a five-reel, 15 pay line game with a payout percentage of 97.5% which is one of the highest paying games in slots history. The game features substitutions, re-spins and collectable multipliers with stunning graphics. The first person “Shoot em up” style takes you into the action via the marines helmet camera and when you combine this frenzied action with the stomping soundtrack you are guaranteed to get the pulse racing. This is one noisy slots game so amp it up and enjoy the fun.

The game is split into three distinct levels, and I’ll take you through the action one by one:

Level One – The Search

In this level, you scan infested premises for any Alien activity and collect the symbols that each have their multiplier value. You add these to the Alien activity meter, and this has nine steps which you need to complete to move on to level two.

Fight your way through successive alien attacks to reach the Queen’s hive. This is where the game starts to get ever so loud! This is the main bonus feature and is equivalent to the free spins round in most other slots games. The multiplier points you earned in level one are transferred over, and there is the addition of an ammo clip where gaining more ammo keeps the round going.

You start this level with five free spins and some grenades which you will use to attack the queen. The Hive health meter shows you how much damage you have done before you run out of ammo. It is this level where you can kill the monster and win a cash prize for doing it. At the top of the screen, you’ll see 60 health symbols which represent the monsters health and the whole scenario reminds me of the classic arcade game Doom! Am I showing my age!?

The Aliens slot game ends when you run out of ammo, and you’ll start over at level one again – just remember to turn those speakers down if you are in a shared space because this game is extremely noisy in the later levels. Alternatively, empty the house and turn the lights off and turn the music up for a fantastic slots game experience.

There is a lack of gameplay here that is made up for by the furious pace of the game and while the fixed pay line may put you off – don’t let it because with such a high return to player of 97.5% you’ll constantly be winning coins and the action never lets up.

A slots game for the Hall Of Fame.