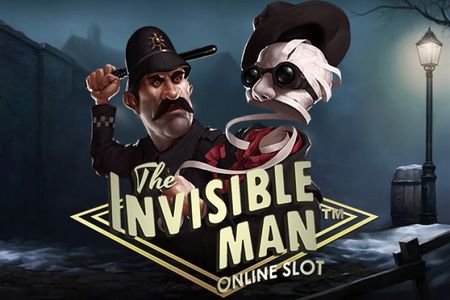 The Invisible Man slot is based on the giant work by brilliant author HG Wells, and it’s another collaboration with Universal Studios. The 1933 movie is the idea for which this slots game has been based on, and it works fantastically well. This is a great slots game. Much better than most of the run of the mill games I get to review here.

If you are interested “Invisible Man” is available as a free download through Librivox, and it’s a brilliant listen. It’s a very creepy tale and way ahead of its time. Well, any decent science fiction writer would be wouldn’t they?

This is a five-reel 20 pay line masterpiece of a slots game, and you’ll love playing it.

The gameplay is made out of 5 reels with three rows and 20 pay lines. The main feature of this game is the “win both ways” feature which means winning combinations can be formed with three adjacent symbols on the reels. The game is jam-packed with great bonus features and a dramatic soundtrack which fits the game perfectly.

Five characters are the high-value symbols with the high cards being the lower values. The special symbols are the Policeman Wild and the Invisible Man Wild

Police Wilds move along the reels from left to the right and a Griffin Wild moves in the opposite direction. There is no scatter symbol in this game.

When a gryphon Wild and a Police wild collide on the reels, they merge activating ten free spins. More wilds appear during this feature, and every time they merge, again you’ll be rewarded with a further four spins.

This is a “pick and clicks” bonus game with three different stages – the Lions Head Inn, The Mansion and the train station. Choose five items to reveal a prize.

The Invisible Man Slot – The Verdict

This is one of Net Entertainment’s best slot games, and they have packed in the features to make it royally entertaining. The graphics are superb, the soundtrack hits the right notes at just the right moments, and with plenty of free spins and wilds along with a great bonus round, this Invisible Man slot is one game you do not want to miss.