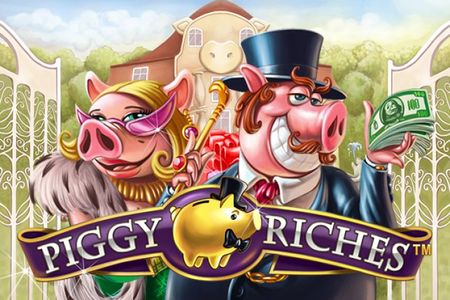 Pigs! Everyone loves pigs! Don’t they? We hope so. Pigs are great animals, very intelligent, friendly, and gentle. In this Piggy Riches slot game though, pigs are the rich pigs of piggy banks, and they’re dressed as the upper classes, which may be an unpleasant stereotype from the leftist anti-capitalist discourse, or… just some fun cartoons in an online video slot – yeah, probably that!

This Piggy Riches slot is a NetEnt title. NetEnt are one of the biggest companies in the online video slots world. On their books – in UK casino sites – are around 300 titles, including a lot you will have heard of even if you’ve never played them, and you will almost certainly have played a NetEnt game if you’ve played any online video slots.

NetEnt are so big and powerful that they have almost 13% of the total games in UK casino sites (according to a trusted industry audit site) and almost 20% of the games in lobbies. That’s an amazing market share.

Piggy Riches slot is not one of their biggest titles and doesn’t feature in a top-20 list that is headed by the massive Starburst, Gonzo’s Quest, and Dead or Alive titles. It’s a very old title, dating back to 2010, and it’s done well to stay on the market and in the spotlight for this long.

Piggy Riches is a cartoon, comedy game on an animal (plus high living, and country house) theme, with a green colour palette and a focus on aristocrats and bundles of cash. The game has pink, green and purple as its dominant colours.

But should you put on your wellies and go for a wallow in Downton Pigsty with these super-wealthy Porcineocrats?

Lets’ have a look in this Piggy Riches slot review!

The Facts and Figures about Piggy Riches Slot

The Piggy Riches slot has a theoretical return to player of 96.4%. That’s pretty average. RTP is commonly used in slot reviews. It’s a figure that records how much a game will return to a player over its whole life if the player behaves in an idealised correct way. Another way of looking at it is as the “house edge” which is 100% – the RTP, or in this case 3.6%. This is the amount of “profit” from a game the house will make.

This long-term measure has some value, but it shouldn’t be used as a measure of how your gaming session will go – you could win a huge prize on your first spin, and all games reviewed here are straight and honest.

The variance is recorded as a medium. Variance is a ratio of prize size against prize frequency, with “high variance” games delivering bigger prizes less often.

This standard 5 by 3 reel layout has 15 pay lines – marked on the screen – that can be played on all devices if you have JavaScript and HTML5.

Game controls are standard issue for the NetEnt family of games, so if you’ve played one of their games you’ll be very at home with this one.

Click on the I button at the far left to check out the bonus features and pay tables. Next to that is a bet window. Betting is set by levels and coin value to make this total. Use the levels controls to the left of the central console and the coin value buttons to its right.

The central console holds the spin button, with an autoplay feature to its left and a max bet button to the right. The autoplay is very sophisticated with up to 1,000 spins allowed, and a lot of options to stop the sequence.

There are further clickable controls and information in the game frame.

Click on the paytables button and up will pop an explanation of the 15 pay lines.

And these pay tables.

There are up to 28 free spins up for grabs with a six times multiplier. Scatters seen during the free spins round trigger a single extra free play.

Produced by those chaps at Net Entertainment who seem to churn out hit after hit “Piggy Riches” is a game full of rich pigs brimming with over-full purses, high limit credit cards and those staples of western commercialism Gold and Furs.

Are pigs rich? Not at all but they are continually used as a euphemism for fat greedy bankers here in the UK and therein lies the appeal of the game.

What would George Orwell make of it all? The esteemed writer of the classic “Animal Farm” would no doubt raise an eyebrow at the pigs and their high-class lifestyle but this is a fun slots game, and if you manage to find five “riches” symbols you’ll trigger the 2,000 coin jackpot.

The Wild in this game is the rich pig in the top hat, and you’ll have your snout in the trough if you trigger a wild win because it triggers a 3x multiplier.

Piggy Riches slot has wild symbols on all five reels, and they will substitute for all other symbols except the scatter symbol.

The bonus scatters the fur adorned “miss piggy”, and if you manage to land three fur piggy anywhere on the reels, you’ll trigger free spins feature bonus round. This is the main feature of the game, and you will be presented with options to work your way through free spins and multipliers as well as landing between 9 and 30 free spins.

The free spins feature is not triggered as often as you’d like but when it happens, you’ll get a big payout.

All of the reels are opulently decorated in gold, and every pay line has a huge “look at my wad” stash of banknotes. Anyone else old enough to remember the original Harry Enfield sketch from the early eighties?

There is nothing complicated about Piggy Riches, and the gameplay is straightforward which is why this slots game is often used for bonus giveaways and free spins. Even though it’s a simple game, it still has plenty going for it, and it’s well worth playing if you haven’t tried it before.

This Piggy Riches slot game is of good quality without being overly complex.

NetEnt can be relied upon to deliver a good playing experience, quality graphics and sound, and fair and honest experience. And they do that here, with a great bit of design and theme.

The bonus games are OK but rather simple. Some players like that, especially on mobiles, but others like something a bit more involved for their extra features. Just be advised of that as you consider whether you play Piggy Riches slot.

We think you should give it a try. It’s got a great top prize, and it’s fun to play, which is just about all you need from a game. As it’s a NetEnt game you’re in safe territory, and you shouldn’t have any trouble finding this porcine spinner at your favourite online casino site today.