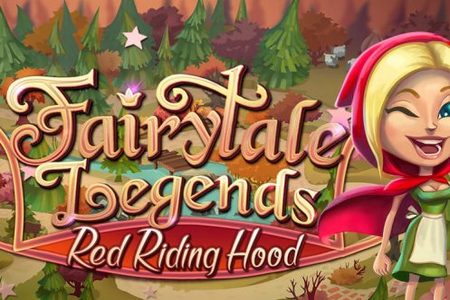 This is the kind of slot that will grab your attention right from the time you start playing it. I would say that the slot is more of a ladies’ kind of game. Why do I say that? The Fairytale Legends: Red Riding Hood slot comes with a fairytale theme about the old fairy tale we were told about as children of the Red Riding Hood who went to visit her grandmother and had to walk through the forest where she came across the big bad wolf.

This slot is set in the dense green forest where you will find playing card symbols on the reels and icons which include leather-bound books, jewelled keys and crowns. You’ll also come across roses, the fairytale legend logo, a treasure chest and the red riding hood wild icon.

The treasure chest is the scatter in the Fairytale Legends: Red Riding Hood slot. The wild symbol is represented by the red riding hood.

The slot has five reels, three rows and twenty fixed pay lines. The symbols are floating freely on a hazy forest backdrop. This is accompanied by some great twinkly music to make your gameplay even more enjoyable.

Spins are from as little as $0.2 to as much as $200 so every player is catered for and can be played on your desktop computer and mobile devices. The slot has seven features that will make your journey through the forest adventurous:

This feature gives you a chance to get a winning line. This will be made possible when you have a cluster of five to nine-win symbols except the fairytale legend logo appearing on the reels.

This will be brought to life after getting an unsuccessful spin on the base game. A symbol will be chosen at random as other symbols turn into the selected symbol to the time a win is achieved.

This is where three or four wilds appear randomly on the three centre reels. This leads to a sticky wild re-spin.

This feature will be activated when you land the treasure chest symbols on the first, third and fifth reels. When you land these symbols, you will get one of the main bonus features activated. Pick any of the three chests to determine the feature to be started. These features are coin win feature, beware the wolf bonus and the free spins feature.

This feature requires you to make a spin on the whirligig. Move across the board to find the route to grandma’s house through the forest. Depending on the road you choose, you will get a cash prize for it. You can win multipliers of as much as 20 times.

This feature has the potential of awarding you a cash bonus of fifteen times your stake.